Does the Enneagram of Personality contradict the Bible?

What is known as the “Enneagram of Personality” or the “Traditional Enneagram” is a complex system of understanding individuals that some tout as the most dynamic and open of the various typologies, offer as a path to liberation or self-actualization, and even promote as a way to know God.

The Enneagram is a geometric symbol containing nine points and nine (or more) intersecting lines (the Greek word for “nine” was ennea). The symbol dates to Pythagoras and was introduced to the West by George Gurdjieff in the 1900s. In the 1960s, occult teacher Oscar Ichazo linked the symbol with nine different personality types. Ichazo taught a system of 108 Enneagrams, but the ones that caught on in the United States were those of the Passions, the Virtues, the Fixations, and the Holy Ideas. Ichazo’s aim was to explain the difference between Essence and personality (or ego). He believed every person is, in his Essence, perfect and in unity within himself as well as with the cosmos. However, the Essence is distorted into the ego. Ichazo saw the Ennegram as a way to examine how that distortion occurs.

There are a variety of modern theories regarding the Enneagram. The current Enneagram of Personality comes from Claudio Naranjo’s expansion of Ichazo’s work with later expansions made by Don Riso and Russ Hudson. The idea of nine personality types is based on the concept of the nine divine forms (Plato and, later, Plotinus), the seven deadly sins, and Kabbalah traditions. Ichazo was influenced by many religious, occultic, and philosophical traditions including mystical Judaism (Kabbalah), Roman Catholicism, Buddhism, Islam, Taoism, and Greek philosophy. Thus, the Enneagram of Personality is a synthesis of many different ideas.

According to the Enneagram Institute, the Enneagram can help people restore balance to their “personality structure” and develop more desirable spiritual and psychological qualities. Believers in the Enneagram seek to unravel the mystery of their “true identity.” They see themselves as spiritual beings who have lost contact with their true nature. Once they discover their “true self”—by means of the Enneagram—they experience a spiritual awakening full of freedom and joy—a “conversion,” of sorts. Thus, the Enneagram is seen as a mystical tool in solving mankind’s problem (a lack of self-knowledge) and providing the means of salvation (self-discovery).

The Enneagram of Personality, as popularized in the West, includes nine types of personality. These are (1) The Reformer, (2) The Helper, (3) The Achiever, (4) The Individualist, (5) The Investigator, (6) The Loyalist, (7) The Enthusiast, (8) The Challenger, and (9) The Peacemaker. Each personality type also has at least one “wing.” The wings are the numbers on either side of the basic type; for example, a type 2 (Helper) would have either a type 1 or type 3 wing, which modifies the way in which the dominant personality is expressed. Each type also has a range of functionality, with three levels considered healthy, three considered average, and three considered unhealthy.

Adding to the complexity, each personality type on the Enneagram is also compared to two other types in terms of integration (security or growth) or disintegration (stress). When under stress, a particular type will often behave as someone in an unhealthy range of a different type would act out. For example, according to the Enneagram, a type 2 under stress will act as an unhealthy type 8. But a type 2 moving in the direction of growth will act more like a healthy type 4.

Personality types on the Enneagram are also grouped into “Centers.” Each Center is formed of three types that share common strengths and weaknesses. The nine types are divided into the Instinctive Center, the Emotional Center, and the Thinking Center. Each center is further characterized by a dominant emotion: anger, shame, and fear. The mapped-out distinctions are meant to demonstrate a dominant way of being, not the only way of being.

Most psychological models and systems of philosophy contain some truth, and the Enneagram of Personality is no exception. There are some ideas associated with the Enneagram that will resonate with students of the Bible and will seem to be helpful. What is dangerous is the purpose of the Enneagram, as presented by its most high-profile promoters:

• Roman Catholic Friar Richard Rohr writes that the Enneagram “is concerned with change and making a turnaround, with what the religious traditions call conversion or repentance” (Rohr, R., and Ebert, A., The Enneagram: A Christian Perspective, Crossroad Pub. Co., 2019, p. 4).

• Another Roman Catholic author, Christopher Heuertz, believes the Enneagram is much more than a personality tool in that it provides “nine ways we can find our way back to God” (Heuertz, C. L., The Sacred Enneagram: Finding Your Unique Path to Spiritual Growth, Zondervan, 2017, p. 25).

• Episcopal priest, podcaster, and self-dubbed “awakener of people” Ian Cron makes the audacious claim that “every number on the Enneagram teaches us something about the nature and character of the God who made us” (Cron, I. M., and Stabile, S., The Road Back to You: An Enneagram Journey to Self-discovery, InterVarsity, 2016, p. 228).

The problem with each of the above statements is that idea that the Enneagram, not Scripture, provides salvation, spiritual growth, and sanctification. Christians believe in the sufficiency of Scripture in all these matters. We cannot get to know God better through a system that bypasses Scripture. We do not need a form of mysticism with roots in Roman Catholicism, psychological theory, and the occult to inform our understanding of God.

When viewed as a means by which to achieve some sort of spiritual liberation or spiritual growth, the Enneagram obviously contradicts the Bible. It “has a form of godliness but den[ies] its power” (2 Timothy 3:5). The Enneagram Institute is correct that we are spiritual beings and that we are not living as we were meant to. But the solution is not to get in touch with our “true nature”; it is to cry out to God for salvation. We are sinners in need of God’s forgiveness (Romans 3:23; 6:23), which is made available by His grace through faith in Jesus (Ephesians 2:8–9). Those who are dead in sin (Ephesians 2:1) cannot achieve a spiritual awakening on their own; they must receive the life of Christ—regardless of their personality type. In Christ we are born again and made new (2 Corinthians 5:17). It is through His power at work in us that we become righteous (Philippians 1:6; 2 Corinthians 3:18). Our lives are meant to be lived for His glory. There is nothing in the Enneagram that is derived from the Bible.

Dr. Gary Gilley, who has researched the matter in-depth, summarizes the problem with the Enneagram: “The Enneagram remains an unproven theory, having no scientific, medical or psychological validation, and is totally absent from the pages of Scripture” (Gilley, G. E., “The Enneagram, Part 2,” Think on These Things, Vol. 26, Issue 3, June/July 2020, p. 4). 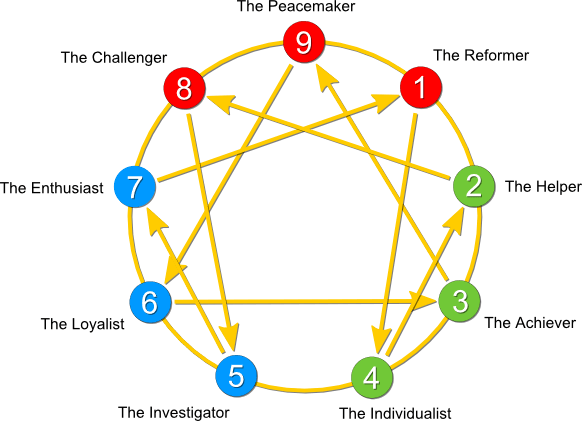 How should Christians view the Myers-Briggs Type Indicator (MBTI)?

What is Jungian analytic psychology, and is it biblical?

Is neuro-linguistic programming (NLP) compatible with the Christian faith?

What is Adlerian therapy (or Individual Psychology), and is it biblical?

What is behavior therapy, and is it biblical?
Return to:

Does the Enneagram of Personality contradict the Bible?