Does the statue outside the United Nations have any connection to the beast of the end times?

In December 2021 a statue was placed outside the United Nations building in New York City. The image looks like a kind of lion or leopard with wings and rainbow-toned coloring. The art piece is said to be “a guardian of international peace and security.” The image is consistent with the style of its creators, Mexican artists Jacobo and Maria Angeles. See below. 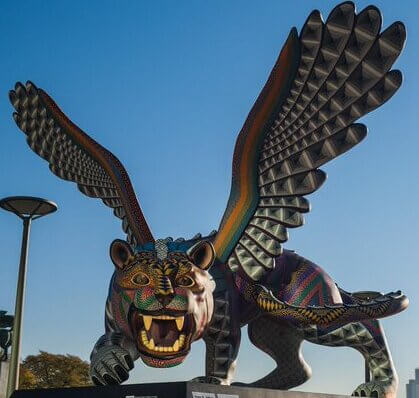 For most people, the statue outside the UN is unremarkable. There are many unique sculptures and art installations in public places all over the world. But some Christians are uncomfortable with the odd combination of the piece’s location, features, and name. Separately, those things would be almost irrelevant. Combined, the statue evokes biblical references to the end times. That has led some believers to wonder if the statue is a further sign of the end times.

Three particular passages of Scripture have been associated with the “guardian of peace and security” statue at the UN building. Daniel 7:2–4 relates a vision of beasts, representing governments; one is depicted with a body like a lion and wings like an eagle. Revelation 13:2 symbolically refers to a beast given power and authority by Satan. First Thessalonians 5:3 speaks of the end times when people will say, “There is peace and security,” only to experience unexpected ruin.

Obviously, a statue resembling end-times images, erected at the headquarters of a cooperative world body, named with a phrase directly tied to the Apocalypse, will raise suspicion. It’s not bizarre for Christians to see something like the UN statue and wonder what it means. Or at least wonder what the persons responsible were thinking when the statue was created and installed.

That said, common sense suggests the “guardian for international peace and security” statue by the United Nations building is not likely to be the precise object seen by Daniel and John. Both their writings describe many beasts, many images, and almost all of those descriptions are symbolic representations of something else. Paul’s statement in Thessalonians is not so much about a literal slogan as it is the world falsely thinking they are secure, only to be caught unaware by the return of Christ. It’s also extremely unlikely that the Antichrist will be so clumsy and un-subtle in his methods.

Most likely, the “guardian of international peace and security” statue at the United Nations has no particular spiritual meaning at all. It’s certainly an unfortunate combination of name, location, and appearance. At the very least, it’s something that probably should have been noticed and addressed before the statue was unveiled. The more unique a set of coincidences, the more reasonable it is to wonder if the connection is deliberate. But coincidence can still be “just” coincidence, all the same.

If the statue at the UN is a vague precursor or literal fulfillment of Bible prophecy, it wouldn’t change anything. Christians are meant to serve, preach, and work faithfully, knowing all end-times events are fixed and part of God’s unchanging plans. The statute does echo elements of end-times prophecy—intentionally or ignorantly—and that at least is a reminder of how little the world knows or cares about God’s Word and His plans.

What is the Revived Roman Empire?

Should a Christian be opposed to globalization?

What is the New World Order?

How should a Christian view the Great Reset by the World Economic Forum?

Should a Christian be interested in conspiracy theories?
Return to:

Questions about the End Times

Does the statue outside the United Nations have any connection to the beast of the end times?