What is the Christian flag, and what does it symbolize? 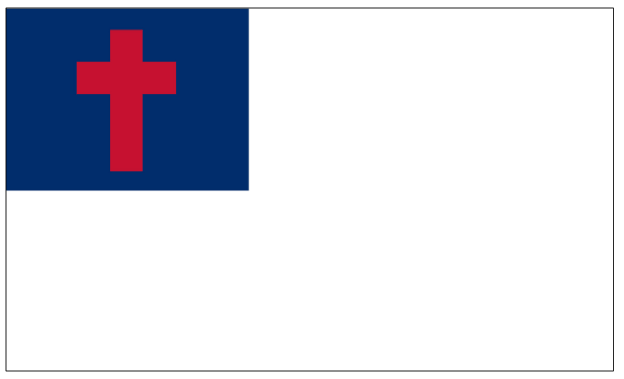 The origin of the Christian flag can be traced to a Rally Day meeting at Brighton Chapel in Coney Island on September 26, 1897. When the scheduled speaker did not show up, Sunday School Superintendent Charles Overton stepped in to give an impromptu lesson. Since there was an American flag close to the podium, Overton discussed patriotic symbolism. As he spoke, he had an idea: why should there not also be a Christian flag with spiritual symbolism? Overton designed the flag on the spot, giving his audience a verbal picture of what such a Christian flag might look like. A few years later, Overton enlisted the aid of Ralph Diffendorfer, secretary to the Methodist Young People’s Missionary Movement, to actually produce a flag based on Overton’s idea.

We can interpret the colors and symbols of the Christian flag as follows: the field is white, representing peace, purity, and holiness. The blue canton is emblematic of loyalty and truth (and possibly of heaven or the waters of baptism). The cross in the center of the blue canton is, of course, a symbol of Christ and His work of salvation; the cross is red, typical of Christ’s shed blood. Taken together, the symbols of the Christian flag portray the basics of the faith: Jesus Christ, the Holy One, died on the cross to grant us salvation, and we serve Him in fidelity and holiness, as He is faithful to us.

A salute to the Christian flag may be accompanied by a pledge:

“I pledge allegiance to the Christian flag and to the Savior for whose kingdom it stands, one Savior, crucified, risen, and coming again with life and liberty for all who believe.”

Some use a theologically liberal version of the pledge, which plays down the gospel element and emphasizes ecumenism:

“I pledge allegiance to the Christian flag and to the Savior for whose kingdom it stands, one brotherhood, uniting all mankind, in service and love.”

Others use an affirmation of loyalty to the Christian flag:

“I affirm my loyalty to the Christian flag and to our Savior whose cross it bears, one spiritual fellowship under that cross, uniting us in service and love.”

And still others pledge their allegiance specifically to the cross on the Christian flag:

“I pledge allegiance to the cross of our Lord Jesus Christ, and to the faith for which it stands, one Savior, eternal, with mercy and grace for all.”

Famous hymn writer Fanny Crosby wrote a song in 1903 eulogizing the Christian flag and what it means. Here are the lyrics to “The Christian Flag! Behold It”:

The Christian Flag! behold it,
And hail it with a song,
And let the voice of millions
The joyful strain prolong,
To every clime and nation,
We send it forth today;
God speed its glorious mission,
With earnest hearts we pray.

The Christian Flag! God bless it!
Now throw it to the breeze,
And may it wave triumphant
O’er land and distant seas,
Till all the wide creation
Upon its folds shall gaze,
And all the world united,
Our loving Savior praise.

There is nothing sinful about displaying a Christian flag or reciting a pledge to it. Given that the Christian flag and its pledge are designed to honor the Lord Jesus, having the flag in a church or school can be a wonderful reminder of Christ and our commitment to Him. The Christian flag’s emphasis on the cross is biblical, since God, through Christ, worked “to reconcile to himself all things, whether things on earth or things in heaven, by making peace through his blood, shed on the cross” (Colossians 1:20).

At the same time, the Bible nowhere advises us to make Christian flags or gives us wording for a pledge. Since the Christian flag is a manmade design, displaying it or pledging allegiance to it is a matter of conscience and not required of any Christian.

God the Son Incarnate: The Doctrine of Christ by Stephen Wellum

What is a Christian?

Is Christianity a religion or a relationship?

What are the core beliefs of Christianity?

Is Jesus the only way to Heaven?

What are the essentials of the Christian faith?
Return to:

What is the Christian flag, and what does it symbolize?